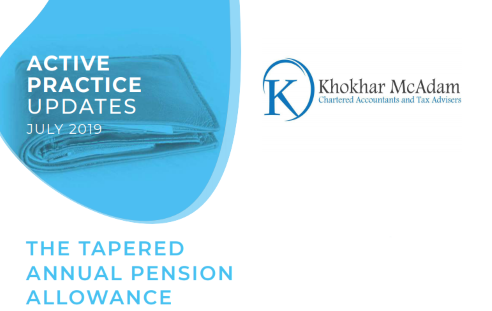 How it affects high net-worth individuals.

The tapered annual pension allowance for high net-worth individuals was in the headlines again recently.

Concerns were raised that its impact on doctors within the NHS pension scheme is prompting high-earning NHS staff to leave their posts or reduce their hours.

In December 2018, it was reported that the number of members leaving the NHS pension scheme was five times higher than from other public pension funds.

Hammond’s reluctance to change the Government’s stance lies in the £6 billion a year the Treasury expects to raise through recent reforms to pension allowances.

The Treasury feels it is justified on the grounds that only the highest earning pension savers should be affected.

During 2019/20, the tapered annual allowance will have a much larger impact on those affected.

If you are a consistently high earner, you are unable to carry forward significant amounts of unused allowance from the years before the taper was introduced.

So what is the tapered annual allowance, and what effect does it have on those that fall within its charge?

How the tapered allowance works

People with a taxable adjusted income of more than £150,000 have their annual allowance for that tax year restricted.

Anyone whose total pension contributions exceed their annual allowance will be taxed, with high earners likely to be caught.

Working out whether the taper applies is not as straightforward as it would seem, however, as it does not apply if your threshold income is £110,000 or less.

In order to work out whether your annual allowance should be tapered, your adjusted income and threshold income need to be calculated. How these two incomes are defined is crucial to understanding whether or not the taper applies to you.

HMRC’s definition of net income is misleading in terms of determining whether the tapered allowance applies, as it does not mean ‘income after tax’.

Instead, net income is taken to mean all of your taxable income, so it is not just restricted to earnings.

Certain deductions, most notably pension contributions made by employees under net-pay arrangements, trade losses, share loss relief and gifts to charities, are then made from taxable income to arrive at a net-income figure.

Tom is a company director and shareholder. His taxable income is £110,000 and the company pays a £50,000 employer pension contribution on his behalf.

The calculation is more complex than it appears, particularly if Tom was to be a member of a defined benefit pension scheme.

A mistake can have costly knock-on implications for your tax bill and pension savings, and it is wise to seek expert advice.

This tax planning method enables you to maximise your pension contributions even where the allowance has been reduced.

It is possible to carry forward any unused annual allowance from the previous three tax years to a year where the taper applies.

*The taper applies for 2019/20, and may have applied in the three previous tax years. Where the taper applied, any available allowance to carry forward is restricted to the unused reduced taper allowance.

The definitions of adjusted and threshold income are open to manipulation between tax years.

To prevent this, the Government brought in anti-avoidance legislation to stop high net-worth individuals entering into salary exchanges or flexible remuneration arrangements after 8 July 2015.

If this type of arrangement meets certain conditions set out in the anti-avoidance rules, the individual’s income before any adjustments were made will be used to calculate the annual allowance reduction.

Since April 2015, retirement savers have been allowed to flexibly access their pension pot from the age of 55.

If this applies to you, you will be subject to the money purchase annual allowance (MPAA), which stands at £4,000.

If you are subject to the MPAA and belong to a defined benefit pension scheme then the alternative annual allowance will apply.

If you are a high earner and are caught by the taper rules, these will apply to your alternative annual allowance.

The Chancellor accepts there is “some evidence the annual allowance charge is having an impact on the retention of high-earning clinicians in the NHS”.

The Treasury and health departments are looking at addressing this issue “in a way that is fair and appropriate”.

However, this is likely to be through increasing flexibilities within the NHS pension scheme, rather than scrapping the annual tapered allowance.

Steve Webb, former pensions minister and director of policy at Royal London, called the tapered allowance “one of the worse examples of unneccessary complexity in tax legislation in living memory”.

Webb claimed it had created “cliff-edges in the tax system, and makes taxation appear arbitrary and capricious to taxpayers in a way that is never desirable”.

He suggested the taper should be replaced with a cut to the standard annual allowance – from £40,000 to £30,000 – applying to all taxpayers equally.

Whatever happens next, the tax issues surrounding the tapered allowance are not confined to the NHS pension scheme as these issues can arise for any high earner under any defined benefit pension scheme.

With the debate showing no sign of dying down, the chance of a policy change remains a possibility for future Budgets.

Talk to us about the annual tapered pension allowance.

Identifying Inefficiencies In A Business